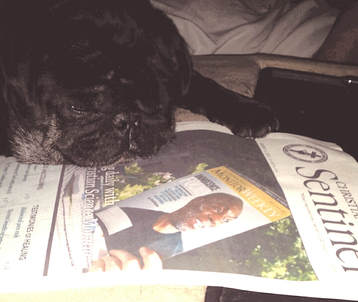 I'd like you to meet Piper. Piper is one of our five (yes, five) pugs.  Piper was born the last of 4 puppies in her litter. Along with that her previous owners placed on her certain material expectations that go along with the smallest of a litter. However, in Christian Science we learn there are "no dangerous inheritances," (See Science and Health, p. 228:7); that there is no latent disease or characteristic which predisposes, or predetermines our state of health (Ibid. 377.31), except our perfection as the "image and likeness" of God. (Gen. 1:26).

So, about two years ago, when Piper began having a problem, we initially thought it would just go away. But, it continued to get worse, and more and more frustrating, because she required a great deal of time and attention to take care of.  She wasn't in distress or pain, but it was an inconvenience.  At the time I was in school full-time, Steve was working full-time, and I was wrapping things up with our small business.  So, Piper's problem just seemed like an additional responsibility.  When it had gone on for a month or so, I decided this had gone on long enough.  I brought her into another room, away from the other Pugs, and I began to read to her from Science and Health with Key to the Scriptures by Mary Baker Eddy.  And she sat, and listened very intently!  Then I started to listen, and I heard the most wonderful idea: Piper is not an inconvenience, she is not an added responsibility, she is God's perfect idea, expressing love, companionship, friendship, joy, and a lengthy list of other God-like qualities.  So, when the problem would require my attention, I kept in thought that this was no inconvenience, this was my opportunity to express my God-like qualities in caring for her.  Within a short time, the problem ceased and has not returned.

Piper requires soft food due to conditions that arose prior to our adopting her.  Over this past summer she began having difficulty chewing some of the larger pieces of the canned food, and stopped eating altogether.  Within a day or so one side of her face was noticeably swollen and she became very lethargic and was obviously experiencing pain.  She would sit in the middle of the floor and stare at me, very knowingly, as though she were remembering what happened during the previous problem, and wondering why I was not doing something to help.  In the interim I had taken Christian Science Primary Class instruction, and had further come to know the Scientific method of healing taught and practiced by Jesus and his disciples, and to "preach the Gospel to every creature."  (Mark 16:15).  So, again, we found a quiet spot away from the other Pugs and I began to read to her, and to know the same truths as before, and this time, to know many of the things we learn in Christian Science, and from Christ Jesus, who said, "Take no thought for your life, what ye shall eat, or what ye shall drink;" (Matt. 6:25), or as the Apostle Paul writes, "whatsoever is set before you, eat, asking no question for conscience sake"(I Cor. 10:27).  If food is "the nutriment of life" (Science and Health, 388:12), then it can have no opposite effect outside of erroneous mortal mind.  It is mortal mind that tells us that, if food sustains us, too much of it can harm us, or if we don't use it properly or handle it properly, we can be injured by it.  But, if food, in its spiritual sense, as given to Man by God, is to enrich us and sustain us spiritually, it can have no opposite effect.  This is just as true of Piper as it is of you and me, for we are all the compound, infinite, unfolding idea of God, and whatever he has given us, blesses us.  With this thought the swelling completely disappeared overnight.  However, after a couple of days, mortal mind begins to assert itself: Is she really better?  Is the problem completely gone?  Is there another problem that is not visible?  And the swelling returned and appeared worse than it did previously!  After more prayer the effected tooth came out, the wound drained, and Piper was back to being Piper.  Just this week, Piper's sister, Paige, was obviously not feeling well, and while napping in her favorite spot, a laundry basket, Piper sat next to her and began to look at me in that same way, as if she were saying, "Give her 'the Truth-cure'!" (Science and Health, 237:15).  I have been praying with ideas particular to Paige, and the idea of any problem is disappearing from her thought, and mine!

Steve and I often spend time in the front parlor of our home studying and discussing Christian Science, and it is amusing and uplifting to me to see, especially Piper, sitting at the door and, I have no doubt, intently listening to us!  God created Man in his own image and likeness, and gave us dominion over all the earth and every thing therein.  With dominion comes, not only authority to rule, but a responsibility to express divine Love in mercy and in justice.  Seeing all creatures as a beautiful expression of God's infinite idea.
Copyright © 2020